The case of violence against women is rising at an alarming rate.
The latest of this ugly social malaise is that of Bashorun Bayo Awosanya, a strong Ogun State APC chieftain and close ally of the State Governor, Ibikunle Amosun, who was involved in a domestic scuffle with his wife, almost resulting in her death, but for the timely intervention of the gate-man who rushed her to the hospital.

The incident reportedly occurred at his Sagamu GRA residence around 8.30pm on the 20th April, 2014(Easter Sunday).

According to a close source, trouble started when Awosanya returned from a house-warming party; he accused his wife of not attending the party with him and before the wife could give a meaningful excuse, he pounced on her beat her blue black, which we learnt has been a habit of his to batter his wife.

Sensing danger, the wife made to escape through the staircase, but he caught up with her, and started hitting her head on the glass railings, and strangling her at the same time.  The injured wife is currently receiving treatment in the Crescent Hospital, GRA Sagamu, right now, but no case has yet been levelled against the wife-beater, Bashorun Bayo Awosanya. 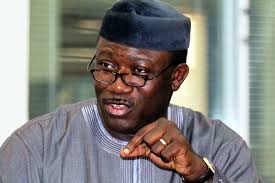 How Mining Council Will Increase Growth In Mining Sector- Fayemi