The Labour movement in Osun State has continued a heated fight against the leadership of the State’s Civil Service agency, now led by Mr. Olayinka Owoeye, whose career in the service is fraught with past corrupt activities.

Mr. Owoeye had been dismissed two times, records show, in both Oyo and in the Osun States, for his role in credit card fraud, and forgeries, and for being in the center of related state investigations. His reputation from both affairs has been tainted, and his role in both states later led to indictments.

In 1995, records show, he was dismissed in Osun State for masterminding a credit card fraud scheme while in office there.

Saharareporters recently obtained a copy of a letter of his dismissal from the service in Osun State.

Again, and later in Oyo State, he was also dismissed after he was indicted over similar financial practices bordering on fraud, records show.

Although the State government is allegedly making efforts to suppress the Labour movement leaders from raising the alarm over Mr. Owoeye’s corrupt service records over the course of his career, there is the potential for more financial harm to the State, say his critics. Some state workers have told SaharaReporters that they are unable to continue working with a leadership that is tainted with a corrupt past.

Workers in the state who spoke with us on the condition of anonymity, also expressed concern that Owoeye may be currently engaging in even worse questionable financial schemes with the state, than he had with the past positions he has held. The state workers offered few specifics to back their suspicions, yet their vehemence and opposition to his possible rise to a higher post within the agency was noticeable, in their off-the-record comments with SaharaReporters.

They said in different ways, and used different words, but the overall impression is one of wide distrust among many of the rank and file employees working under Owoeye.

Mr. Olayinka Owoeye is said to have been favored among other job candidates for the higher position as the head of the service. This favoring, it is believed, is due to Owoeye’s alleged loyalty to Mr. Rauf Aregbesola, while he was contesting the state elections in 2007 to become governor.

Lai Mohammed Fires Back At Obasanjo! 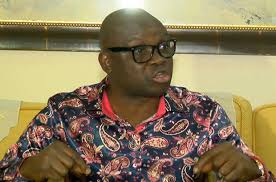