Mr. Obasanjo also alleges the president has put 1000 politicians on his watch list.

Former President Olusegun Obasanjo has alleged that President Goodluck Jonathan is currently keeping over 1000 people on his political watch list while also secretly training snipers and other armed personnel as well as acquiring weapons for political purposes.

He stated in an 18-page letter to Mr. Jonathan, exclusively obtained by PREMIUM TIMES, that from what had been alleged, the snipers were being trained at the same place the late Head of State, Sani Abacha, trained his own killer squad.

The former president however warned that if the allegation was true, it would not augur well for him (Jonathan), the government and Nigerians.

“Allegation of keeping over 1000 people on political watch list rather than criminal or security watch list and training snipers and other armed personnel secretly and clandestinely acquiring weapons to match for political purposes like Abacha and training them where Abacha trained his own killers, if it is true, it cannot augur well for the initiator, the government and the people of Nigeria,” Mr. Obasanjo said in the letter dated December 2.

Mr. Obasanjo said the president would always remember that he was elected to maintain security for all Nigerians and protect them, warning that no one should prepare to kill or maim them (Nigerians) for personal or political ambition or interest of anyone.

Quoting a Yoruba adage that says: “The man with whose head coconut is broken may not live to savour the taste of the succulent fruit,” Mr. Obasanjo said those who advised him (Jonathan) to go hard on those opposed to him were his worst enemies.

He added, “Democratic politics admits and is permissible of supporters and opponents. When the consequences come, those who have wrongly advised you will not be there to help carry the can. Egypt must teach some lesson.”

Apparently referring to the recent judicial freedom of Hamza Al-Mustapha, the late Chief Security Officer to Mr Abacha, the former president said the presidential assistance for a murderer to evade justice and for a presidential delegation to welcome him home could only be in bad taste generally, but particularly to the family of the victim.

He said, “Assisting criminals to evade justice cannot be part of the job of the presidency. Or, as it is viewed in some quarters, is he being recruited to do for you want he had done for Abacha in the past. Hopefully, he should have learned his lesson. Let us continue watch.”

Mr. Obasanjo did not however say if Mr. Al-Mustapha is training the snipers.

The former President recalled that in 2011, Mr. Jonathan told him he would serve for only one term, but that he (Obasanjo) later heard from other sources, including those close to the president that he had also made the same commitment somewhere.

Mr. Obasanjo said following those assurances, he threw his support behind Mr. Jonathan ahead of the 2011 presidential election.

He said that was his reason for including his support for Jonathan’s candidacy in his address at the grand finale of the President’s 2011 campaign at Eagle Square, Abuja.

“When you won the election, one of the issues you very early pursued was that of one term of six years,” Mr Obasanjo added.

“That convinced me that you meant what you told me before my speech at the campaign. Mr President, whatever may be your intention or plan, I cannot comment much on the constitutional aspect of your second term or what some people call third term. That is for both legal and judicial attention.

“But if constitutionally you are on a strong wicket if you so decide, it will be fatally morally flawed.” 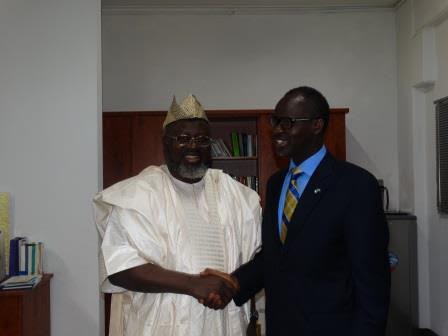