Nollywood star, Ayo Adesanya has found love again, yemojanewsng.com can exclusively reveal.
Very dependable sources informed yemojanewsng.com that the beautiful actress has fallen in love with a young dude who works with the Lagos State Government.
We learnt that Ayo Adesnya is so obsessed with the guy that it has become difficult for her to sleep until she sets her eyes on him every night.
Though information reaching us indicates that the guy who is heavily loaded with cash lives somewhere around Ikeja, but makes sure he visits Ayo Adesanya almost everyday in her Magodo home to assure her of his genuine love.
The source also informed yemojanewsng.com that Ayo and the handsome dude met at a club around Ikeja, and they hit it off instantly.

Meanwhile, the source could not confirm if her new found love whose father is a top politician in Ogun State is married or not.
Ayo Adesanya who is about 45 years old was earlier married to a movie producer, Hazzan Goriola, but the marriage hit the rock few years later.
Ayo had said in an interview with a soft sell magazine published last month was quoted to have said that she may not get married again, but she may change her mind if the new man in her life possesses the qualities she wants in man.

Ambode’s “Incompetence”, Where The Economist Got It Wrong 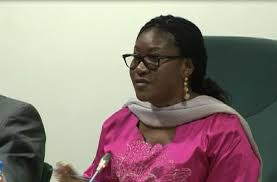 Gender-Based Violence Must Be Wiped Out In Our Society -Lagos APC Women Leader, Jumoke Okoya-Thomas