The Interview comes weeks after information surfaced online that the actress was suffering from acute depression and had allegedly attempted suicide.

Tonto has had a fairly rough year starting from the release of her singles ‘High’ and ‘It’s Ova’ in March this year.

The singles met negative reviews from the public and had spiraled into a war between Tonto and her followers on social networking site Twitter.

Her critics had also re-appeared after she fell on Iyanya’s stage in London but she says in this video… she’ll continue to be strong.

‘Dont Discredit Our Chairman, Company! Nobody Attacked You Inside National Assembly”-OMSL Debunks Allegation Of Attack On NPA MD 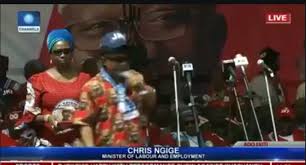