The race for the 2023 Presidential Election is gathering momentum and is becoming interesting by the day.
While some candidates are trying to outwit others in the race for Aso Rock Villa, Abuja in 2023, others appear not to be too keen on mounting the coveted seat.
However, the choice of who becomes the next president of the country lies on Nigerians as the election would determine the future of the country.
But indeed, the office is not for anybody, who can speak or captivate the masses, but it is for a candidate, who truly loves Nigerians and who has enough to show for his past performances.
Such fellow should understand the political dynamics of the country, what should be done to make it better and how to carry Nigerians along in the scheme of things so that they can benefit the real dividends of democracy.
One man that fits this picture is the standard bearer of the All Progressives Congress (APC), Asiwaju Bola Ahmed Tinubu, who is being rooted for by progressive Nigerians.
In Lagos State, where Tinubu served as Governor from 1999 to 2007 and was able to reproduce himself in his successors, some big wigs in the city are working hard to ensure that Tinubu emerges the next President of Nigeria.
They made it a point of duty to let whoever cares to listen know that “Tinubu is the new hope of Nigeria and a man with great ideas that can restore the lost glory of the country.”
According to them, President Muhammadu Buhari has tried his best to fix the nation and improve its fortunes, Asiwaju Bola Ahmed Tinubu would improve on what has been done and come with more ideas.
The list of those working for the emergence of Asiwaju Bola Ahmed Tinubu as Nigerian President is inexhaustible, but some of them are highlighted in this feature.
Speaker of the Lagos State House of Assembly, Rt. (Hon.) Mudashiru Obasa.

The Lagos Speaker is one man that is doing everything possible to ensure that Asiwaju Bola Tinubu wins the 2023 general elections.
Prior to the primary election of the party, Obasa organised a prayer programme for Tinubu in Mecca, Saudi Arabia. After that he has been leading the lawmakers in the assembly to campaign for Tinubu in their locality.
There are reports that Obasa has sponsored many campaign posters for Tinubu and has also printed seveyr of souvenirs for the man he sees as godfather.
Senator Ganiyu Olanrewaju Solomon (GOS).

Solomon, a former two-term member of the Senate and a chieftain of the APC, is not handling Tinubu For President with kid gloves. GOS has been spending money and moving round, especially in many parts of Lagos West to explain to the people why Tinubu should be the next Nigerian President.
GOS is not new to politics and we were informed that he has been sponsoring campaign materials, including jingles to promote Tinubu’s cause.
Hon. James Abiodun Faleke

A member of the Federal House of Representatives, is the Secretary of the APC Presidential Campaign Council.
Adeleke, who was the Chairman of Ojodu Local Government, is like a son to the former Lagos  Governor.
The influence of Faleke in Lagos political scene can never be over-emphasised, especially in Lagos West. He has since been using his experience to campaign for a better Nigeria. He has also been diligent with his work as the secretary of the campaign council.
Dele Alake

Dele Alake is a man of class, a veteran journalist and a former commissioner for information and Strategy in Lagos State. Alake is one of the spokespersons of Tinubu/Shettima presidential ambition.
Dele Alake has been using all within his power to promote the APC campaign activities in the media with television/radio appearances, newspaper interviews, reaction to negative stories from the mill of rumour mongers.
There is no doubt that Alake has been using many media platforms to promote Tinubu/Shettima ambition.
Bayo Onanuga

Bayo Onanuga heads the media team of the Tinubu/Shettima Presidential Campaign Council. Onanuga, a veteran journalist, has never relented in his job of promoting Tinubu in the media. As a spokesman for the campaign committee his job involves going round the country, meeting media practitioners and executives. He has also written many articles, many reactions and many messages to enlighten members of the public about why Nigeria needs Tinubu as the next president.
Cardinal James Odumbaku

Cardinal James Odumbaku is an elder statesman, a leader of the APC in Lagos and a member of the Governance Advisory Committee (GAC) in Lagos.
Odumbaku is a man that has earned much respect over the years and he is known as a Christian leader in the state. He has since been busy wooing the people in the Christian community and others to the side of Asiwaju Bola Ahmed Tinubu.
He makes them believe that Tinubu has been tried and tested and should be given the job of leading Nigeria from 2023.
Femi Fani-Kayode

Femi Fani-Kayode is a former Minister of Aviation in Nigeria.
The trained lawyer-turned politician is the Director of New Media of the APC Presidential Campaign Council. Femi has also been defending the candidature of Tinubu and promoting his cause through the media.
The brilliant lawyer never allowed any negative criticism against Tinubu go un-replied in his characteristic manner that is dazzling a lot of Nigerians.
Mutiu Are

Alhaji Mutiu Are is the Director, Contact and Mobilisation Committee for the All Progressives Congress (APC) Presidential Campaign Council.
Are, a versatile and experienced politician has even said that the South-West will deliver 95 per cent votes for Bola Tinubu in the presidential election.
Mutiu Are is a close person of Tinubu, and they are always discussing issues relating to his plans for the country.
The respected politician has been using his influence among the people to lead a strong campaign for Tinubu. There is no doubt that Are is a man that follows whatever he believes with passion and this is manifesting in the campaign.
Ayo Gbeleyi

Ayo Gbeleyi is a former Commissioner for Finance under former governor Babatunde Raji Fashola and one time Director-General of the Lagos Office of Public-Private Partnerships (PPP) and later Special Adviser to the Governor on PPP.
He has been a close ally of Asiwaju Bola Ahmed Tinubu, who believes that he deserves to be the next president of Nigeria and that Nigerians should rally round him. He has been reaching out to those that matter on why Tinubu should be given chance to rule the country from 2023.
Femi Pedro

Femi Pedro was Deputy Governor to Asiwaju Bola Ahmed Tinubu as Governor of Lagos State from 2023 to 2027.
Since then, he has been close to Tinubu.
Pedro has been actively involved in Tinubu for President and he has been working hard to ensure that he is victorious in the election. This is reflected in his activities over the months since Tinubu declared his intention.
Hon. Jumoke Okoya-Thomas

Hon. Jumoke Okoya-Thomas is a three-term former member of the Federal House of Representatives.
Hon. Okoya-Thomas is currently the woman leader of the APC in Lagos State.
She has been mobilising women to support the APC in the state in the general elections and to vote Asiwaju Bola Ahmed Tinubu as the next president of Nigeria.
She has a strong grassroots mobilisation strategy that would be an advantage to Tinubu’s presidential ambition.
Adejoke Orelope-Adefulire

The Senior Special Assistant to the President on Sustainable Development Goals (SDG), Adejoke Orelope-Adefulire and a former Deputy Governor of the state, is another politician working for the emergence of Tinubu as the next president of Nigeria.
Adejoke Orelope-Adefulire is influential in both Lagos State and in some parts of the South West and she is using this diligently to ensure that Tinubu emerges the next president of Nigeria.
She has been leading campaigns among the women and telling them why Tinubu should be trusted with the authority of the country as someone who has the capacity to take the country to greater heights.
Abike Dabiri-Erewa

Abike Dabiri-Erewa, a former member of the Federal House of Representatives from Ikorodu Constituency in Lagos State and now Chairperson of Nigerians In Diaspora Commission (NiDCOM), is another woman that is championing the campaign for Tinubu presidency.

Dabiri-Erewa has been reaching out to Nigerians in the country and in the Diaspora, assuring them that the future of the country is secure under Tinubu presidency.
She has organised several programmes to get across to Nigerians both at home and abroad and she has spoken as guest speaker in several fora on why Tinubu presidency is desirable at this crucial time in Nigeria, assuring the people that he is the only unifier amongst the candidates. 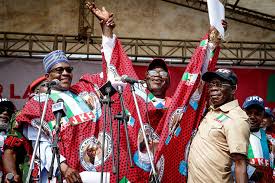