Lagos socialite and darling of Fuji musicians, Bolaji Esho, as you read this is currently cooling his heels at the Security Intelligence Bureau (SIB) of the Lagos State Police Command, Ikeja, over a case of N48 million fraud.
Our Source exclusively gathered that the embattled socialite was picked up in the evening of Thursday, April 10, 2014, at his Yaba, Lagos based bar and immediately whisked away in hand cuffs.
Esho’s arrest was due to a petition written to SIB, by a Nigerian business man based in Malaysia, Samson Ajani.
In his petition, Ajani claimed he gave Esho the sum of N48 million to assist him build a farm in Epe, Lagos since 2012.

But till date nothing had been done on the farm, except a small fence. And that all efforts to get Esho to complete the project or even return his millions met a brick wall. He disclosed that it got to a stage, Esho started threatening his life.
A police officer who confirmed Esho’s arrest to our source but does not want his identity disclosed, said they took Esho and Ajani to the farm site at Epe on Friday, April 11 and saw for themselves that nothing had been erected on the virgin land.
“My brother, we are still investigating. Once we conclude our investigations, Esho will be charged to court. Since his arrest, his friends in high places have been storming SIB and putting pressure on us to release him. As I speak to you, he is still in our custody and helping us with investigations.”
Meanwhile, we could not get a reaction from the PPRO, Lagos Command, Ngozi Braide, before publishing. 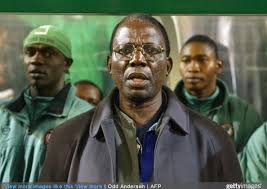 EX-Eagles Coach, Adegboye Onigbinde Files For Divorce From Wife, Says She Is Violent And Stubborn!