LASU defended its decision on multiple choice only questions.

All that is required of part-time students at the Lagos State University, LASU, is to answer a set of 70 multiple choice questions every semester to be awarded a Bachelors degree, YemojaNews has learnt.

In what one university professor described as a “dangerous development” in the already poor standard of university education in the country, LASU earlier this year directed all lecturers at its part-time campuses scattered across Lagos to henceforth set only multiple choice questions for all examinations.

Copies of some questions seen by this newspaper suggest that the questions were haphazardly put together with irregular numbering, ridden with grammatical and sometimes factual errors. It is devoid of the standardized quality associated with public multiple-choice examinations.

There seems to be no effort made by the university to control and manage the standard. Invigilation during the examination was lax, if any at all, we learnt. Examination halls were so crowded that some students did their examination standing in many of the campuses.

Although results were released in record time, there were several cases of missing results.

Al-Amin Alli-Balogun, the President of the Students’ Representative Council, SRC, said many results were posted in the wrong campuses. After several days of searching, some students at the Agege campus saw their results posted at Festac campus. Rather than being an exception, it was the norm across all campuses, he said.

“The MCQ [multiple-choice questions] have been able to curb the issue of no results, missing results and the excesses of lecturers,” he admitted.

However, he described the introduction of multiple choice questions only as a “disgusting moment” in the history of the programme. He said the school management only introduced it to deceive students that something is being done to correct the anomalies of the programme.

“We don’t have qualified lecturers; the LASU management is only doing this to deceive the students that the programme is changing while it is actually decaying the more. Mass failure is still an issue. Students don’t have proper records of the examination they have taken before or the one they should be taking next,” he said.

One student at the Anthony campus described the quality of the printing papers the questions were printed on as similar to what one sees during secondary school mock examinations.

The examinations were so substandard that some enterprising students kicked against the development to the point of openly protesting against it to lecturers, YemojaNews was told.

A former student leader of the programme, Julius Adeoye, highlighted other problems with the examination:

“Writing OMR will not even allow the students to grow because I can easily copy and paste but if I’m required to write theory [essay type questions] there is no way I can copy everything from another student. Students don’t even attend classes anymore they just show up for examination knowing they can easily copy the answers of other students,” he added.

But LASU management said its adoption of the multiple choice questions only for part-time student was the best solution to the horde of problems bedevilling the programme.

“For those who know how to develop the content, multiple choice is a better assessment than theory,” said an aide to the university’s Director of External System, Dayo Akinshola.

“Multiple choice is not an innovation in Nigeria. As far back as the 1970s multiple choice has been in existence. If anybody is against it, it is one of three reasons: one, the person is lazy and doesn’t know how to set the questions. Secondly, the person doesn’t want to relinquish his power of oppression because with multiple choice questions you’re not going to have contacts with the students again and thirdly for whatever reasons, the person wants to frustrate certain people and he knows with multiple that will not be possible. The benefits are endless so whoever doesn’t understand the concept must belong to one of those three categories,” Mr. Akinsola, who said he has over 20 years experience as an academic, said.

He said lecturers who criticise the introduction of the multiple choice questions are bitter because the university has effectively plugged their means of extorting students. He also denied that the examinations were conducted in overcrowded rooms. He challenged any student with proof to present it.

However, prominent academics in the country disagree with Mr. Akinsola on the superiority of the multiple choice questions as a means of assessment.

Despite their ability to cover wide areas of the subject matter, multiple choice questions fall short of assessing the skills that make a “total graduate,” said Oyewusi Ibidapo-Obe, a former Vice-Chancellor of the University of Lagos, UNILAG.

“It is not sufficient. It falls short of examining all the aspects that are very critical to the making of a graduate. When people finish they will be faced with actually writing up opinions in a very legitimate literate version. So we need to teach them the concept of composition; of writing,” Mr. Ibidapo-Obe, a Professor of Applied Mathematics and Engineering Systems, said.

“I think it is a dangerous development as it may not be able to fully assess a student’s performance,” said Professor Akii Ibhadode of the University of Benin, UNIBEN.

He advised that a mixture of multiple choice questions and essay type questions can be useful up to the second year level but not further than that.

The National University Commission, NUC, spokesperson, Ibrahim Yakassai, said universities have been directed to desist from setting entirely multiple choice questions. He promised that the commission would investigate and stop LASU from continuing with the practice.

The LASU part-time programme is a thriving auction for the sale of results and theses, YemojaNews can reveal.

The sale of theses, we discovered, are so widespread that lecturers now brazenly ask students to pay into their bank accounts and present copies of tellers as proof of payment. Students are required to pay as much as N50,000 before their proposals are supervised or up to N150,000 to have one written for them by the lecturers themselves.

Female students are given considerable discounts if they agree to sleep with lecturers.

Another student at the Festac campus said he paid because everyone else was paying.

“You don’t expect morality from where immorality looms. When lecturers are not paid you don’t expect them to behave professionally. Imagine LASU just paid lecturers three days ago [October 30] for salaries that have been due for over two years. How do you expect them to survive if they don’t engage in immoralities and misconducts,” said Mr. Alli-Balogun.

Mr. Akinshola said any lecturer who indulges in malpractices under the pretext of owed honorarium is just being dishonest. He said lecturers are paid on time. He explained that the only lecturers who were not paid were those from the School of Communication because they were ripping the university management off.

“The only honorarium that was delayed and paid two days ago was the one for the School of Communication. They are the people saying all these kinds of rubbish. We know their antecedent. We know their stock in trade. We are not going to bleed our eyes over 1400 students when we have 50,000 students elsewhere. These are people who see it as a means of enriching themselves. They are busy inflating the amount they want to collect and the university management in its own wisdom said no.

“The issue was investigated by the director and at the end of the day it was discovered that the university has been thoroughly ripped off. They were forced to revert to the norm and once they complied they were paid. That money was processed within two months. If they had complied two years ago they would have been paid their money. They were asking to be paid the money that they never had.” The spokesperson said.

He said the school management has already come up with plans to stop extortions of students by lecturers but declined to say what these plans are. He said any student who pays for his or her theses to be supervised or written is doing so at his or her own risk.

The disorderliness of the examinations and in fact the entire part time programme indicates that the university management is doing everything to rid itself of a programme with a long history of malpractices as quickly as possible.

Following report of widespread malpractices soon after the part-time programmes were relocated from the university’s main campus in Ojo into poorly equipped campuses across the state, things spiralled out of control.

The programme was over taken by a hostage mentality. The university management, lured by the high fees paid by the students, admitted more students than it could handle. Because regular lecturers couldn’t cope with the rigour of teaching regular students as well as part time students, the university management resorted to employing part-time lecturers, many of whom are secondary school teachers without any experience in teaching at the tertiary level. Worse, they were not properly monitored or mentored as one would have expected. They were left to their own devices.

Frustrated by delayed payment of honoraria, many of these part-time lecturers resorted to brazen-faced extortion of students. Results were withheld for close to two years by some lecturers. For instance, results of some English Language examinations written in June 2012 were released in October 2013. Saddened by rampant malpractices, many full-time lecturers washed their hands off the programme.

Worried that incessant scandals associated with the part-time programme was going to irreparably tarnish the university’s reputation, in 2011, the State government scraped programme. The university management was directed to stop admitting new students. The last of the current students are expected to graduate in 2016 when the programme would be finally rested. 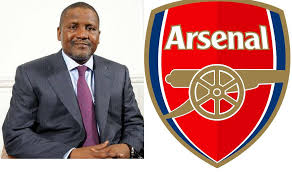 I will fire Wenger if I buy Arsenal – Aliko Dangote