One hot gist that keeps reverberating through the Lagos society centers round the fate that befell Kola Alagbada.

The popular and handsome Big Boy once worked as a Special Adviser to Senator Bukola Saraki during his tenure as the governor of Kwara State.
The gist has to do with how Kola was beaten up by a contractor, identified as Wale.

It was gathered that he had signed up Wale to work on a construction project he was assigned to supervise. Somehow, Kola was reported to have got irritated with the slow pace at which the work was going. He visited Wale with his anger and an argument ensued between the two men. In the ensuing melee, Kola gave Wale a resounding slap and the latter retaliated with more than a slap.
Eyes witness’ account revealed that Kola got a sound beating from his assailant.

By the time he managed to wriggle himself out of Wale’s hold, Kola was already gasping for breadth, with his outfit, torn.

Although, the issue was resolved between the two men, Kola is still cursing the day his strength chose to dessert him on account of the severe beating he received from another man.

‘Someone, somewhere helped me into office,’ Vice President says 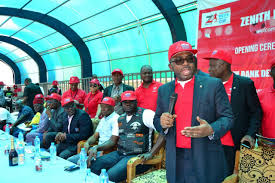