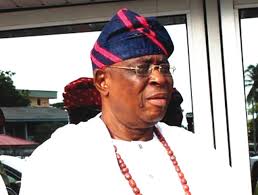 Ogun 2019 Election: Osoba Reveals What Ogun West Must Do To Produce A Governor