Human and Vehicular activities were today paralyzed on the always-busy Ilesa-Akure-Benin expressway, as members of the National Union of Road Transport Workers (NURTW) in the Ondo state branch blocked the road for almost three hours, preventing the free flow of traffic.

The blockage was a result of a protest staged by the drivers over allegations of multiple taxation on their members by the State Ministry of Transport which they said as been “a tongue in the flesh.”

SaharaReporters has learned that the aggrieved drivers were chanting anti-government slogans, and solidarity songs calling for the removal of the Commissioner of Transport in the State, Otunba Nicholas Tofowomo.

Many of the drivers who spoke, also allege that Officers of the Federal Road Safety Corps (FRSC) in Ondo State, collided with the Men of the ‘Sunshine Traffic Corps’ of the State Ministry of Transport. The collision is over billings spokesmen from the group claim their members have been hit with ‘unnecessary taxes,’ which they believe is illegal.

They revealed that at every bus-stop where they dropped their passengers, officials from the ‘Sunshine Traffic Corps’ always stop them, with embarrassing claims that have them demanding money for tickets that are not remitted to the state government’s coffers.

In the words of one member, who declined to identify himself, “it is unfortunate that FRSC officers have now joined the Sunshine Traffic Corps of the Ondo State Ministry of Transport in holding us to ransom. Both of them have now work out a theory that by stopping us, where we park, it is an illegal place, and illegal for us to pick-up passengers in the wrong place.”

“The most painful thing is that, before you know what is happening” the source said, “they will surround you and chain your vehicle. Thereby, booking anyone caught (by this roving band) with a N25,000.00 fine instantly. If you don’t pay, they will impound your vehicle, and they won’t release it until you pay.”

“Just tell me, what type of government do we now have in Ondo State,” said another driver, “with all this taxation in different forms? We can’t accept this anymore. Tofowomo (Commissioner for Transport) must go, or he should leave us with our job. This driving job is what we use in feeding our families.”

The protesting drivers further alleged that over 20 vehicles belonging to their members have been seized by the Sunshine Traffic Corps, with the help of Officers of the FRSC in Ondo State, and even abandoned them in their office.

One passenger revealed his experience during the seizure of a vehicle belonging to a driver. He said after he had boarded a vehicle, the manner, and tone of the Sunshine Traffic Corps is questionable, rude, and aggressive, and needs a thorough investigation.

The passenger also disclosed that alerting the Traffic Corps of illegal parking has compromised the officers of the Federal Road Safety Corps (FRSC). The claim of illegal parking, in effect was just wrong, and the official had booked the car of his driver for wrong parking, or illegally picking-up passengers at a wrong position.

“I am surprised that (the) FRSC men have joined this league of traffic corps in taxing and harassing our people in any circumstance. You will see them leaving their own job and running after transporters and taxi drivers, just to book them for N25,000.00. This aggressive activity is too much in this state, I do hope the government will intervene,” the transport worker said angrily.

A source later told SaharaReporters that it took the effort of Officers from the Ondo State Command led by its Assistant Commissioner of Police, Edward Ajogun, to quell the matter before it was later brought under control.

When contacted, the Commissioner for Transport in the state, Mr. Nicholas Tofowomo, said the drivers have been warned on several occasions to stop picking passengers up by the road side.

Tofowomo added that the State government built a Motor park for all transporters in the state, and they have been compelled to stay at their park to pick up such passengers. He stressed that all allegations against his portfolio are baseless.

SaharaReporters pressed further about the allegations of taxing the driver over wrong parking slots, but the Commissioner was fast to react, and said, “Yes, we always book them (with fines) ranging from N5, 000.00 to N25,000.00 if they go against the law of parking, and picking up passengers at a wrongful place. This is what they know.”

“Ondo state government has built a standard motor park for them. Let them go to the park and pick passengers and travelers up (from there,) instead of staying on the roads and picking up passengers, thereby causing traffic, and gridlock on our roads. We won’t accept it,” he said.

An official of the Traffic Control Corps in the Transport Ministry told SaharaReporters that the State government had given them a mandate in ensuring the Internally Generated Revenue (IGR) of the state through all available means of fetching money for the state.

With all of this, Tofowomo and his team had been receiving commendations from the state government especially during the weekly executive meetings (Exco Meeting) at the State House in Akure. At those meetings Tofowomo and other officials boast that through this initiative of ‘booking’ drivers who parked and picked passengers at a wrongful place, the state gains additional revenue. 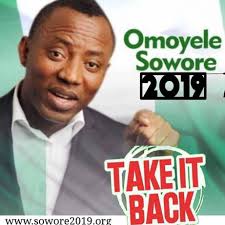 Unemployment: Lai Mohammed Says 1000 Young Men Can Get Jobs By Dressing One Masquerade In A Week!